Today’s update includes Minecraft 1.19 support, adding more weapons back to the game, as well as a new map for the Mine-Spades mode, Duga!

GunColony now supports logging in using the new Minecraft 1.19 version! We don’t anticipate any problems as 1.19 does not change the resource pack format, and from our own testing Fabulous Mode works just fine on this version as well.

Also note that if you want to build maps for GunColony, please use Minecraft 1.17.1. 1.18 is also acceptable, but the new content in 1.19 won’t be supported on GunColony for a while. 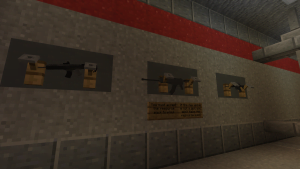 All temporarily removed Rifles, Shotguns, and Pistols have now returned in the update with new rebalancing and stats. This includes 33 total weapons!

Ideally, they will find a good and balanced spot in the game, and players can either choose to use these new weapons or the existing weapons and still be competitive in-game.

The remaining Submachine Guns, Sniper Rifles, and LMGs will be re-added in the next part of the anniversary update.

The M16A1 is a suppressed assault rifle that uses a Vietnam War-era 20 round magazine, which is its main downside compared to other rifles. In return, it has a high 800 RPM rate of fire making it a powerhouse even at long range, alongside a relatively affordable price tag.

The AK-103 is a powerful 7.62x39mm assault rifle that achieves much better accuracy than the AK-47, both in single and sustained fire, but has inferior hipfire accuracy and handling speeds than most other assault rifles. It also has a high supply cost and can be thought of as belonging to a similar role as battle rifles.

A semi-automatic rifle used for law enforcement. The rifle is now semi-auto to distinguish it from the other scoped rifles and because this is the rifle’s most common configuration in real life. It is generally more accurate than the M16A4 thanks to its predictable recoil, and shares a high headshot damage, but is more expensive, slower, and lacks a burst mode. It will still be known as the SIG 556xi in CS:GO scenarios, where it will still have a fully-automatic fire mode.

A fully automatic experimental rifle that was once slated to replace the M16 in U.S. service but failed to do so. While it has an integrated 3X optic, it lacks in full-auto stability compared to other scoped rifles like the G36. In return, its lightweight design makes it a viable choice for close range combat.

Assault rifle that shares the unique caliber and magazine design of the P90. Its 5.7x28mm caliber is small for an assault rifle and has low damage and recoil, but can still penetrate body armor effectively. The low damage per bullet is compensated by a high rate of fire of 850 RPM.

A 7.62x51mm battle rifle that uses a large 30-round magazine, giving it one of the highest damage outputs per magazine in the rifle category. Its heavy weight slightly reduces recoil but also results in very slow handling speeds.

A bullpup assault rifle that deals very high damage at close quarters thanks to a combination of high-caliber rounds and fast fire rate. Its high recoil prevents it from being useful from long range, however.

A marksman rifle cut down to carbine length. Due to its bullpup design and shortened barrel, it has exceptional mobility and can uniquely be fired while sprinting. However, a low cyclic rate of fire of 260 RPM prevents it from being used as aggressively as SMGs.

A suppressed Russian battle rifle firing a unique and destructive 12.7mm round. It has a low rate of fire and backup ammo capacity, as well as a very expensive price.

An early Soviet automatic rifle firing a unique 6.5mm ammunition. It is noted for its use during the 1939 Winter War. With a low rate of fire it is not very powerful in modern combat, but could still function decently as a long-range weapon and has a cheap price.

A new Israeli assault rifle first displayed in 2019. With a fairly high rate of fire, it is quite suitable for close quarters despite lacking the mobility of lighter weapons such as the Mk18. Like the two Galil rifles in-game, the Carmel has rather erratic recoil for its caliber.

A Chinese assault rifle firing the unique 5.8mm caliber, which in turn grants the weapon a unique damage profile and ammo modifications. It has fairly average performance for an assault rifle and is geared slightly towards long-range usage.

A shotgun that will be rather iconic to old-school players of GunColony, this classic weapon has relatively tight spread which allows it to be effective at a longer distance than other shotguns. Its main downsides include expensive price and very low movement speed.

The Sawed-Off shotgun is very effective at close range for a cheap price, but its damage drops off rapidly at a longer distances.

A shotgun that offers low spread but rather lackluster damage ranges. However, it is loaded with a detachable magazine which allows for faster reloading.

A South African pump action shotgun that has two unique attributes. Its forward pump action allows for bump firing which increases the fire rate, and its dual-tube design allows a skilled operator to reload two shells at once.

A pump-action shotgun with a high ammo capacity of 14 rounds and extended effective range.

A classic pump action shotgun that can fight at above-average ranges for a shotgun, but is lacking in damage. Great for corner maneuvering tactics.

Another member in the list of low-spread shotguns, the Ithaca 37 fires a small WW2-era 16 Gauge shell and achieves a lower spread due to the lower bore diameter, but with significantly less damage than other shotguns.

A modern semi-automatic combat shotgun based on the AK platform. It has an integrated duckbill choke which offers reduced vertical spread.

A starter pistol chambered in 9mm. While it is inexpensive and accurate, it really does not do a lot of damage, and aiming for the head is advised.

An 9mm automatic pistol with a 16-round extended magazine. While it is capable of defeating enemies faster than any other sidearm with both higher damage and rate of fire than the Skorpion, it is in the most expensive price bracket for a pistol and has extremely high recoil.

A .32 ACP pistol which is very inexpensive, costing no supply in PVP. However, it is not a starter pistol in Competitive, similarly to the Welrod. It has a much higher rate of fire than other cheap pistols, but inferior damage per shot. In Scenario mode, it will typically still cost some Supply to equip.

A 9mm pistol from Beretta with an ergonomic design, allowing for an increased rate of fire. Compared to similar weapons like the Tec-9, it features better accuracy but a smaller magazine capacity.

A fully automatic variant of the famous Mauser pistol. It offers greater accuracy than other automatic pistols, but has a low hipfire and moving accuracy. It shares damage values with 7.62x25mm Tokarev SMGs such as the PPSh-41.

A classic revolver that features a relatively high rate of fire. Compared to the previous version of the Colt Python in the game, the rate of fire was increased even further but a firing delay has been added to this weapon.

The Chinese QSZ-92 is a cheap way to get a pistol with high armor penetration. It is useful when expecting enemies to wear body armor, and avoids some key mobility downsides of the Five-SeveN, but comparatively lacks stopping power.

A Russian 9mm pistol with a high pressure design for increased range. It also features a large magazine and high bullet velocity, held back by the high recoil generated by its high pressure munitions as well as a lower fire rate than competing pistols.

The XD is a starter pistol with similar stats as the Glock-18. However, it features a suppressor in return for 1 less bullet in the magazine as well as the lack of a burst mode.

A fan-favorite .45 ACP pistol characterized by its very fast rate of fire and high damage, but with very high recoil and poor hipfire accuracy as a downside.

A rather heavy sport pistol firing .22 Long Rifle rounds. It counts as a Hardcore Weapon but still has some practical use as a longer range weapon. In practice it performs similarly to the Nylon 66.

A rare revolver weapon whose unique bottom barrel placement offers excellent recoil control. It lacks the fire rate of the Colt Python, but is also cheaper in return. Its significant power comes at the cost of a 0.1 second trigger pull delay.

An exotic handgun that fires a single .50 BMG round for devastating effect. Only a few examples were ever made, making it almost as legendary as the mythical “sfg 50”. It costs the most out of any secondary weapon, at 4 Supply.

Duga is a map built by Kelad8_Mark_VII based on the Soviet Duga radar array. It is available exclusively on the Mine-Spades mode where players can freely place and break blocks.

Duga is an experimental and interesting map because it was built on a vanilla 1.18 world, and as such should play quite differently than any other MIne-Spades map so far. The map consists of open terrain and trees that players will occasionally need to clear out using the destruction features in Mine-Spades. It will also have more natural resources than other maps, which future updates to the Mine-Spades mode could attempt to take advantage of. These differences to existing maps could provide great insight to how to create good gameplay on the Mine-Spades mode.

Duga is available on both Domination and KOTH, as well as an experimental random spawns KOTH mode. The KOTH mode will also have a 50% chance to have a midair objective on top of the radar tower which can only be reached by building, instead of the regular objective location at the bottom of the tower. The random objective placement on this map is an experimental feature and could be removed in the future.

Finally, it is also playable on the Nuketown Scenario Mode.