This is a minor update with major code changes that took longer than expected. That said it’s finally done! There’s a skin system teaser in this update as well as several quality-of-life improvements like being able to drop items in Mob-Arena.

We have added a weapon skin system into the game! Weapon skins give your weapon a distinct look to help you stand out from other players. Currently there is only 1 skin in the game but many more skins will be coming soon.

We have added a quest system to the server. There is currently only 1 quest but more will be added in due time.

Actual weapon skins will be coming in the next update, but for now we have added the M16A1 | OG skin to test the system. This skin gives back the classic look of the M16A1. 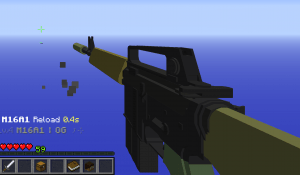 To get this skin, simply get 100 kills in Arcade or Veteran PVP before September 30 (/quests to check your progress). It’s an exclusive skin meaning that it will no longer be obtainable after this event!

The Low Player Bonus has returned!

We have implemented a long-request improvement to our block hitboxes.